A Cough Equals A Dark Cloud of Doubt

Yesterday was my 3 month PET scan. I had the usual scan anxiety. But the rational part of my brain was trying to rule my thoughts to a good outcome. I've been feeling great. Two weeks ago, I even had my best mental and physical day of the last 12 months. I had no pain. I had energy. I was feeling good. I even had thoughts of, it could be possible to have many, or most of my days, pain free and without a care.
But then I crashed. I felt like I was getting sick. I never did get full on sick. I did get a cough. At first it was annoying. But this last weekend and the beginning of this week it was bad with congestion. I decided not to wait until my already scheduled appointment to report my cough. I called the Dr. on Monday.  They said it probably was just the start of an upper respiratory infection and called in an antibiotic prescription for me.

The combo of not feeling 100%, anxiety about my scan and the sound of my horrible cough got me down. I just needed that cough and my fears to go away!!!!

How do you overcome the fear of the unknown?

The bracelet in the photo was given to me by an acquaintance that is a pancreatic cancer survivor. I don't wear it all the time. But I put it on when I feel the fears overpowering the hopes. I wore it yesterday.

The scan results reflected how I was feeling before the cough set in. No active cancer is visible on my PET scan! There will be no changes in my current treatment plan. You don't fix something that isn't broken.

My next set of follow up scans will be at the end of October, 2016. Instead of a, more detailed, PET scan, it will be a CT scan with contrast. I will also have a brain MRI. This is just a routine one year scan. There is no current reason or concern that requires an MRI.
at July 28, 2016 No comments:

One year ago today the Uncle Samta windsock was hung with care and the first toy donation was under the tree. I had last minute preparations to complete for our Christmas in July party that was scheduled for the next day. 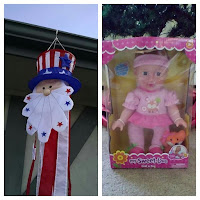 One other thing I had to do that day was get a CT scan. This was the next step after something cloudy showed up on an xray two weeks before. I was to get the scan and have a follow up office appointment, a week or two later, with my primary care physician, Dr. Bird. I never expected a follow up phone call within hours of my scan appointment.

It was Dr. Bird. I can't remember the words he said. Whatever it was it sounded serious enough for me to grab the nearest pen and piece of paper and started writing words and notes from our conversation. 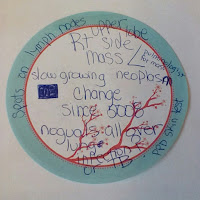 For other breathing issues I had a CT scan in 2008. So we had a baseline to compare to. When referring to my upper right lobe he used the words, mass and slow growing neoplasm. There were spots and nodules throughout both of my lungs. The nodules looked like an infection in the scan. I had been tested for TB. But it was days before we had the final results. There was a possibility I had tuberculosis. But I hadn't been out of the country or around anyone with TB. I discussed the party with Dr. Bird. I didn't want to spread an infection to my family and friends. And I didn't want to cancel the day before. He suggested I cancel the party. But if I decided to still have the party, I needed to keep my distance, wear a mask and not cough near anyone in case this was an infection. He referred me to a pulmonologist for the next test, a bronchoscopy, scope biopsy, to determine if the neoplasm was benign or malignant.

I had never heard the word, neoplasm. So I went to the internet to look up the definition.

It was the the first time the word cancer had come up. I decided to stay away from the internet research until we knew exactly what we were dealing with. I didn't want to waste time and energy researching anything that didn't pertain to me and my condition.

I decided the show must go on. I didn't cancel the party. I didn't wear a mask. I had been around so many people at home and work. There was no way I had a contagious infection. Someone would have caught it by that point. We had fun, drinks and laughs that night. And we collected a bunch of toys for the Bob Telmosse Christmas Giveaway. 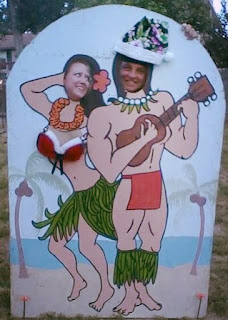 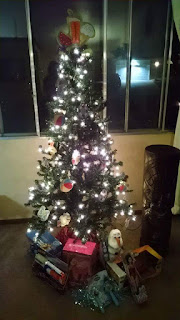 It was a good time and a much needed distraction that weekend. 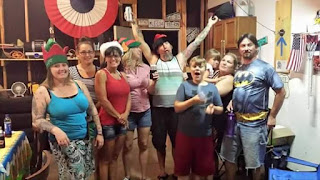 I will be released for all physical activities as of August 1. It just so happens to also be World Lung Cancer Day. 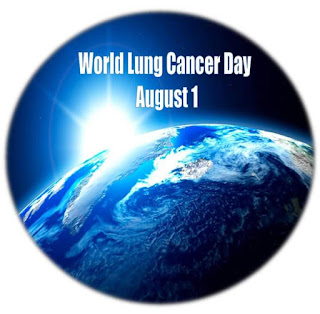 I am currently able to participate in low impact activities. After August 1 I'll be allowed to run again. I plan on running at least 1 mile symbolic run on August 1.

This was Week One of my Livestrong at the Y sessions. I'm so excited to get back to working out again. With the program my boyfriend/caregiver and I get free YMCA memberships to use anytime during the 12 week program.
I went to my first spinning class in a year. It was actually my first fitness class in a year. I have to admit, I got very emotional during the class. I was there, working out, just like before I got sick. I was there, working out! It was just like old times. I even had one of my dearest gym friends by my side. My friend, John, works out at the Y. We used to work out together in group fitness classes at Bally's and have known each other for over 10 years.

During my spin class I got emotional thinking about being able to do the things I love again. I also thought of an online lung cancer connection, Don Stranathan. He is a seven year stage iv lung cancer survivor.  For several months I've followed his posts about going to his spin classes. His posts have been so inspirational and motivational. Thank you, Don.

This is the first in a series of, "One Year Ago Today" posts.

One year ago today, on July 9, 2015, I met the man that ultimately saved my life.  One year ago today was my first appointment with my (then first and new) primary care physician, Dr. C. David Bird.

I explained to him I was having some shortness of breath and a persistent cough. I told him of my intermittent breathing problems and my brief, two appointment, history of going to two different urgent care type facilities and being told told, both times, (Dec 2014, June 2015) that my lungs sounded clear, when obviously to me they didn't feel clear.

At my Dr. Bird appointment I had an xray. That xray showed something in my upper lobe of my right lung. Dr. Bird said, although it may be the cause of my breathing problems, an xray wasn't enough to go on. He ordered a follow up CT Scan. The rest is history.

Why is it important to have a primary care physician? For me more frequent check ups, with one doctor, may have meant an earlier detection, possibly before a stage iv, inoperable, lung cancer diagnosis.

December 2014, I went to an urgent care type facility with what I thought was bronchitis. I was told my lungs sounded clear and my cough was from post nasal drip. Now, at the time I did have a terrible head cold. But at the appointment I made it a point to tell them that I coughed constantly, even without the head cold. I remember saying, "Jeremy says I cough all the time." No xray, no additional questions about my cough, no follow up suggested. I was given sinus meds to clear my head and sent on my way, like every other person with a head cold and post nasal drip that winter.

Fast forward to June 2015. Again, I thought I had bronchitis. I went to a different urgent care type facility. I told this Dr. that I felt like I had bronchitis and I coughed blood one time. I was told my lungs sounded clear and I had the tail end of a virus that was going around. No xray, no additional questions about my coughing blood, no follow up suggested. It really was one time, one cough, but I COUGHED BLOOD! I was given cough medicine and sent on my way, like every other person with that virus last summer.

I owe my life to Dr. Bird.  Dr. Bird, a physician that listened to me and followed through until we knew exactly what we were dealing with.

One year ago today my life changed completely. It was just a few weeks later I would find out exactly how much it was going to change. 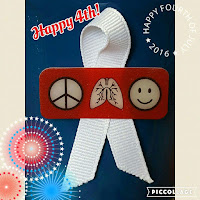 The 4th of July has been one of my top holidays. We will be celebrating the 4th on the 3rd this year. Today's activities will include family, food, a festival, friends, fun and fireworks. Some of my favorite F words!  Be safe everyone and enjoy your holiday weekend.
at July 03, 2016 No comments: