Hanging in There and My first Published Article

I received a great report from my oncologist.  My lung cancer is stable and my CEA/biomarker is within normal range and the lowest it's ever been.  My next set of tests will be in three months to monitor for possible cancer progression.  Hopefully there will be no change in the next three months.

My first article was published at Lungcancer.net today.  Click on the link or photo below to read it.
https://lungcancer.net/living/hanging-in-there/ 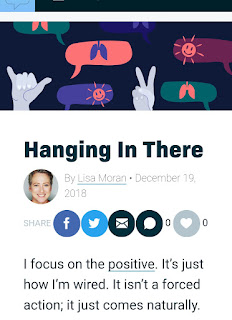 
One year ago, on December 8, 2017, I nearly died from a blood clot and hemorrhagic stroke. Some fast action, an emergency craniotomy and brain surgery saved my life.


Last December I was in California with my boyfriend,  Jeremy, and my mom for my Moyamoya direct and indirect bypass brain surgery at Stanford University Hospital.   The plan was to have my surgery on December 5, spend two to three days in the hospital and then I would rest for a week with my mom in a rented apartment near Stanford University Hospital. After a week I would have a brain scan, a follow up exam with my neurosurgeon and be released to fly home.


That was the plan.  Sometimes you need a Plan B.  This is what really happened. Please note, I was groggy from surgery and pain meds.  So, this is my drug induced, stroke riddled, brain's way of recollecting the events that transpired.


The surgery was a success.  I spent a day and a half in the hospital after my surgery.  My vital signs and blood pressure were stable. I was released to rest at our rented apartment.  Jeremy drove us from the hospital to the apartment, stopping at a pharmacy to fill a pain medicine prescription along the way.  I was tired but awake enough to send a couple texts to check in with family and friends to let them know I was doing well and out of the hospital.  A day later, at the apartment, something went wrong.


I was doing and feeling fairly well considering I had a craniotomy and major brain surgery less than 72 hours before.  I was sitting up while drinking a smoothie for breakfast and talking with my mom in the living room. Jeremy was sleeping in a bedroom.   All of a sudden I felt a quick, sharp, stabbing pain in the right side of my head. It caused a knee jerk reaction to hold my hand to my head and wince in pain.
I could see the panic on my mom's face.  I told her to calm down and it was nothing I hadn't felt before.  That was a half lie. There were a couple times I had felt sudden pains in my head prior to the surgery, but nothing this severe.  Then there was a second stab. It was even more painful than the first. I confessed the pain was nothing like before surgery. It wasn't like expected post brain surgery pain either.  We called the neuro surgeon to report the change in my status.


The pain continued and wasn't easing up.  It was moving around my skull and I could feel it behind my right eye.  I remember hearing a noise too. The sound of rushing water, wind shear or radio static between stations are the only ways to describe it. I lost track of my space and surroundings and I was feeling nauseous.


I asked Jeremy to help me to the bathroom.  This apartment bathroom was stark white. It had white paint, white tile, white fixtures with a white countertop and white vanity.  It even had white towels and a glass shower door. So no color whatsoever to break up the white in this room. Jeremy held my hands as he guided me through the short hallway between two double mirrored closet doors that led into the bathroom.  I remember screaming out that I couldn't see anything. I was super confused why I couldn't make out any objects in the room. All I saw was solid, bright, white around me. I was in a white tunnel


I've heard stories of seeing the white light before you die.  I wasn't moving toward that light. It wasn't in the distance.  I was inside that light. I couldn't see Jeremy infront of me or our reflection in the vanity mirror.  But I do know my body was physically standing in that stark white bathroom at that time.
I don't know who called 9-1-1.  But I do have this flash of a memory of EMTs asking me questions at the apartment.  I can't remember which room I was in when they arrived or when they were talking to me.  I don't remember going to the ambulance, the ride to the hospital or anything else from that day.


I was rushed to Stanford University Hospital.  I underwent emergency brain surgery to repair a brain bleed and evacuate a clot.  I was lucky to be alive. Most of the time, people do not survive a hemorrhagic stroke.  Whatever happened that day, from the apartment to the ambulance to the operating room, I can say,  I sure was at the right places at the right times. I can also say, I'm living proof that the power of prayer and positive thoughts can work miracles.


I was in the Stanford hospital for twelve days, pretty much unresponsive, before showing signs of improvement and being transferred to an acute rehab facility at Santa Clara Valley Medical Center.


When I arrived,  I could hardly respond when anyone came to my room to speak with me.  I had Left Side Neglect. It impaired my vision. I would lose sight of objects,  like my phone or a water pitcher if it was placed in front of me and off to my left side.  I couldn't feel or move anything on the left side of my body. I couldn't even wiggle my left toes.  Movement returned to my left arm first. I couldn't use my hand, but I could move my arm at my shoulder.


I eventually regained movement in my leg and foot.  There were days I was aware and alert and not curled up in a ball, asleep in the bed.  I started occupational, physical and speech therapies while at SCVMC. I walked out with a cane on my discharge date, which was a week earlier than projected by my rehab medical team.  It was also totally unexpected since a wheelchair was assigned to me prior to my discharge date change.


Last December I was sitting in that acute hospital bed in California, unable to walk,  trying desperately to find the Cleveland Browns game on my hospital tv. For some reason networks don't like to broadcast 0-14 teams outside of their geographical region.  This December I'm fully mobile, without a cane, and getting ready to see two Browns games in person, in one week! I'm still recovering and have many stroke deficits. Even with these negative issues, I don’t often say,  I suffered from a stroke. That's because I
SURVIVED a stroke!