A Clinical Study and a Collapsed Lung

Twenty-one days ago I participated in a clinical study. At one point I thought a clinical study and/or trial meant you are a guinea pig and even though you were seriously or terminally ill you got the placebo (sugar pill) or the trial drug that may or may not work. That's not the case. There are many different types and stages of clinical trials.

The study I took part in was to improve blood biopsies. There was no medication to take or multiple trips to the doctor to be examined or monitored. I simply had to agree to submit some vials of blood.

Twenty-one days ago I remembered what it was like to have to go through a surgical biopsy. For me, that was traumatic (my first surgery) and painful with a three week recovery. I submitted a few vials of blood to improve a non-invasive procedure to diagnose lung cancer. I was all for that.

If you thought I was on board twenty-one days ago, I am now the head engineer on that train that can't go fast enough. This week I was scheduled for an outpatient lung biopsy procedure. In and out, they send the tissue to pathology for diagnosis and we know what we are dealing with. It's a common procedure, but there are certain risks that are discussed before you start. One of those risks, ever so slight, is a collapsed lung. For the biopsy procedure they are putting a needle into your lung to capture tissue. In a sense, they are puncturing your lung. In most cases, after the procedure, the lung closes on its own and heals up at the puncture site. Not in my case. My lung collapsed.
I was admitted into the hospital and had to have a chest tube put in place to help "re-inflate" my lung. Although, not as traumatic as my first surgery, it was my first overnight hospital stay, EVER!

I can't wait for the day when a lung cancer biopsy will be a simple office visit and a blood draw only.

Please note: these are descriptions of my medical experiences, how I understand them, in my laymen's terms. The procedures mentioned and defined may not be 100% medically accurate/correct or my doctors words. Thank you.
at May 12, 2017 2 comments:

I was diagnosed with stage iv lung cancer in August 2015. I didn't register for the 2016 LUNGevity Hope Summit. At the time, I was just getting used to life with lung cancer. I followed the social media posts and photos. It looked like a good time was had by all. It gave me hope and inspiration. I got to attend and be in the photos this year. 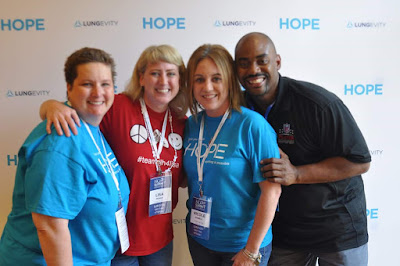 Hope Summit features inspirational speakers, medical expert forums, lung cancer survivor-specific sessions, and opportunities for lung cancer survivors to connect with other survivors and share their stories. Their stories of hope. Hope Summit is appropriately named because that's what this last weekend delivered. I'm at a new step in my treatment plan. You would think being immersed in three full days of lung cancer talk would be depressing and make me worry about these next steps. It was just the opposite.

As a first time attendee, I applied for and was granted airfare and hotel stay to attend this year's Lungevity Hope Summit in Washington DC . Lungevity provides this so all lung cancer patients have an opportunity to participate in this event.

I also attended an advocate day, which was on the eve of the Hope Summit kick off. I was interested in finding out information on advocacy and how to be more involved, if possible.

On Thursday evening I went out to dinner with a fairly large group of lung cancer patients and survivors. This was one of my favorite moments of my trip. I find it interesting that 17 people, with 17 different backgrounds, 17 different lung cancer stories and probably 17 different combined lung cancer treatments and/or drugs and we instantly bond with one another. Some have had it rough and some have been to hell and back. Some have been dealing with this for months and others for 12+ years. But having lung cancer is our common ground. I heard a good comparison once. Someone was taking about skiing. He said the downhill skier going 70+mph has the same adrenaline rush as the beginning skier, even when they aren't going the same speeds. I'm guessing the 17 of us have the same hatred for lung cancer.

Having time with other lung cancer patients and survivors was my best part of going to Hope Summit. It gave me the opportunity to thank two of them, in particular, in person.

I was at the top of my physical fitness game when I was diagnosed. One of my first fears was the possibility of never running again or working out like I used to. But I watched videos of Juanita power lifting and doing what she loved and what she did before lung cancer. That gave me hope. 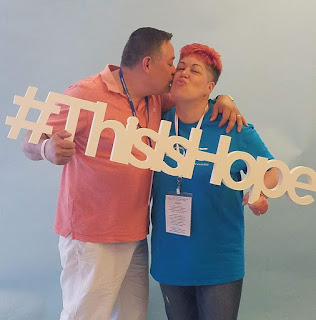 The other was Patty. I would see her online, participating in events with Team Draft. Her smile and attitude would shine in the photos and videos. 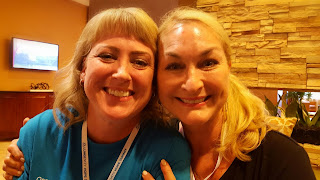 I knew I wanted to be a part of that. It gave me hope that one day I would. And I did! Down to the wire, Patty was my biggest competition during the Team Draft Lung Cancer Survivors Super Bowl Challenge. If anyone was going to raise more funds than me and knock me out of the running, I wanted it to be Patty. 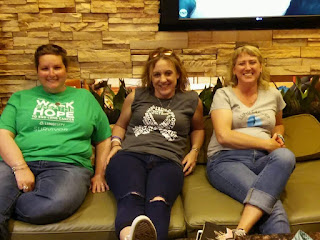 Several weeks ago this question came up. What is hope? Without thinking too hard about it, this acronym came to mind.
Hope
is
Having Optimistic Perspectives Everyday.
at May 04, 2017 1 comment: