Meaningful football to me this week:It's the Cleveland Browns playing a do or die game in Denver.  It means, possibly turning this season around in Week 9, although, a bit late in the season. It means, beating a top rival, again, at Mile High. It means bonding with my Browns football family while tailgating like we are in the Muni lot and watching the Browns in person instead of on TV.

It also means It's Lung Cancer Awareness Month, the kickoff of the Team Draft Lung Cancer Survivors Super Bowl Challenge.  I'm anxiously waiting the details of this year's challenge because I have set a $50,000 fundraising goal.  I'm super excited to get started!  Yes, fifty thousand dollars.  Top challenge participants have set the bar high.  It's time for me to join their ranks.  I'll share the details in a future post.

Meaningful football 2015/2016 Season:The NFL preseason was underway in August 2015.  It was the dawn of a new era for the Browns. My football family and I were reunited after a long summer without football to watch games and cheer the Browns through another season.  Like many years before and every season after, we had hope, we believed.

I was diagnosed with stage IV, non small cell lung cancer during preseason on August 14, 2015.  At that point it was, by far, the most devastating, emotionally draining and excruciatingly difficult time of my life.  But what did I do the night before finding out the stage of my lung cancer and what my prognosis and treatment plan would be? I attended a Browns preseason game with the Pikes Peak Browns Backers in Colorado Springs, CO.

I had a lot of fatigue, some pretty uncomfortable and painful side effects when I started my first line of lung cancer treatment.  I had times I was scared to leave the house. But I would get up, get dressed, in orange and brown, and still go to watch the Browns play with my local Browns Backers club.  That's how important the Browns are to me. That's meaningful football.


It was a chance to go to Cleveland and an opportunity to attend the Panthers vs. Browns game with Team Draft. I live in Colorado.  Before December 9, 2018, I had only been to one Cleveland Browns home game.


That weekend was amazing.  Not only did I get to personally witness the Browns win at home, it was the 1 year anniversary of surviving a hemorrhagic stroke.  I got tears in my eyes when I was in the stadium and watched the Browns take the field that day. I get emotional today thinking about that moment.  I was alive. I was standing. I was walking. I made it through the toughest year of my life. Not only did I survive the stroke and make miraculous improvements in my recovery over the year, I did it all with late stage,  stage iv, terminal, lung cancer. 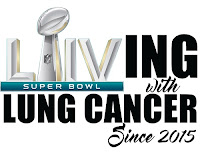