We are gathered here today to get through this thing called life...

Yesterday was a bittersweet day. Lung cancer has a lot of ups and downs.

Elizabeth Dessureault lost her life to lung cancer yesterday.
She was so young and vibrant. It's just not fair. She was very positive through all her ups and downs. She raised lung cancer awareness and spirits with her attitude and just breathe bracelets. 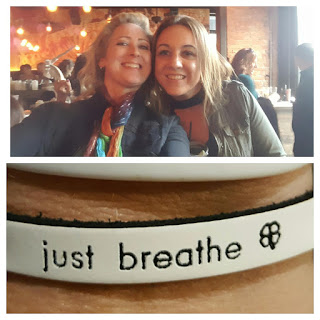 I have a From Lizzie's Lungs bracelet. It was a gift from another lung cancer survivor, Nicole Russell. Nicole's 1 year cancerversary was yesterday. A cancerversary is the one year anniversary of one's lung cancer diagnosis. She is beating the odds, changing the face of lung cancer and surviving stage iv lung cancer for over one year. Congratulations Nicole. I love you and want to thank you for your friendship and support on this roller coaster called lung cancer.
at February 26, 2017 No comments:

Party With a Purpose

Eighteen years ago, in 1999, I wanted to start my own business. I dreamed of being a party/event planner. But I also wanted to work in the non profit sector. I came up with an idea of planning parties for fundraising events. An example would be a birthday party. It's your birthday. Instead of having a party and receiving gifts, you ask your guests to make a donation to the charity of your choice. I even named my business, Party With a Purpose. But I had just moved to a new state. I was not familiar with the town and vendors that I would need to collaborate with to plan successful events. Party With a Purpose never came to life.