Just when my lung cancer and I were getting along and learning to coexist in the same body, there's something new in the mix.

I've been laying low and quiet lately because I was waiting on the confirmation of a possible new medical condition.

Last month I requested an early brain MRI, before my routine, annual, MRI date of October. I had some vision changes and other symptoms that sounded like possible lung cancer metastasis to the brain. I got the all clear. No cancer in my brain.

But what I did get was the news that they thought I could have a rare brain blood vessel disease called Moyamoya (moy-uh-moy-uh). In addition to the brain MRI, I needed an additional brain scan called an angiogram ct scan.

I got the results today. It's confirmed. I have Moyamoya.

Moyamoya disease is a rare, progressive cerebrovascular disorder caused by blocked arteries at the base of the brain in an area called the basal ganglia. The name “moyamoya” means “puff of smoke” in Japanese and describes the look of the tangle of tiny vessels formed to compensate for the blockage. 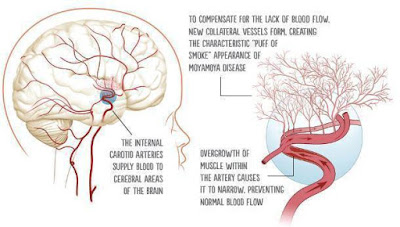 I am asymptomatic. I have no symptoms or signs of stroke or mini strokes. So, surgery is not my line of treatment at the moment. I will probably have to take a baby aspirin once a day because I am at risk of stroke.

My case will be presented at an upcoming neurovascular conference. It sounds like the neurology version of the lung cancer tumor board.

Not only am I a mutant because of my gene mutation driven lung cancer, I'm truly one in a million. Moyamoya is that rare. I will be doing some research regarding gene mutations and Moyamoya. If there a connection between my lung cancer and Moyamoya, I'll find it.