Where Do I Get My Strength?

I've never really questioned where my strength comes from.
People ask, "How do you do it?, when referring to my attitude, resilience and perseverance while dealing with my continuing, life threatening, medical diagnoses and complications. Someone coined the more than appropriate term,  'Medical Apocalypse', to describe my compilation of ailments and diseases.  Throughout life my general feeling was, my strength came from within. I never questioned it or doubted it. I was lucky to have it.

I met Marilyn Pinaud in the summer of 2016.
We were both speaking and sharing our lung cancer stories at a Lung Force Walk in Denver, CO. Although both of our stories were different, they both started with the same underlying storyline. If our stories were two different newspaper articles, they could have the same headline, "Active, Otherwise Healthy Woman Surprisingly Diagnosed with Lung Cancer" 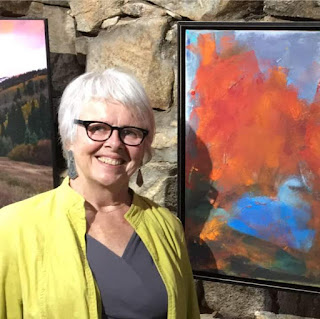 Marilyn and I didn't live close. I didn't see her very often. We both periodically attended the same lung cancer events. Marilyn was my Facebook friend. I followed her posts about her artwork and her lung cancer treatment plans and options and sometimes, lack of options. Since we didn't see each other often, one particular visit in May 2017 was special. I was at University of Colorado Hospital for what should have been a routine, outpatient needle biopsy. My lung collapsed.  I was admitted for my first ever overnight hospital stay, . Marilyn happened to be at the cancer center while I was in the hospital.  After her appointment she found my room and stopped by to check on me.

Fast forward to another hospital stay for a different reason.

December 20, 2017: I was admitted to an inpatient acute rehab in California following a hemorrhagic stroke and emergency brain surgery.

My sister and boyfriend were posting updates on my condition on social media. I had contracted two infections while in ICU after the stroke and emergency surgery. I was very sick and weak. I lost feeling on my left side of my body. I was curled up in a ball in my hospital bed, asleep most of the time. I couldn't wiggle my left toes. I couldn't move or lift my left leg.

As I mentioned in a previous blog entry, something miraculous happened after just days in the rehab. I regained movement on my left side.  Each day I would wake up with much more energy than the day before. It was like I was a new person each morning

December 26, 2017: I stood during my physical therapy session.

December 27, 2017: I walked down the hall of my hospital ward.
December 28, 2017: Two things happened on this day. I received news that my discharge date would be eight days earlier than originally planned because I was recovering so quickly.  I also read a moving message Marilyn Pinaud had sent to me via Facebook, four days earlier, on December 24, 2017. She had offered the strength she had left, at the end of her own life, to me as I was recovering from my stroke. 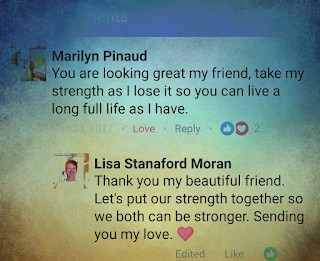 How do you reply to a message like that?  I wanted to thank her for the sentiment but I didn't want to think of another one of my friends losing their life to lung cancer.

January 3, 2018: I was discharged from the California acute rehab and flew home to Colorado.

I was home for about a week before an extreme fatigue set in. The rapid recovery I was experiencing in rehab had come to a screeching halt.  I was getting weaker and weaker by the day. It got to the point that I couldn't take more than a few steps without my heart racing and getting out of breath.
I had an appointment with my primary care physician. I told him we needed to figure out what was causing the lethargic type fatigue. Because of the Medical Apocalypse, it could be one or a combination of multiple things.  Was it new medications?  Lingering infection? Or was it lung cancer progression? He listened to my heart and lungs, checked my oxygen level, and ordered bloodwork and a chest xray. The xray showed no pneumonia.

January 25, 2018: Just as miraculous as my California recovery, two days after seeing my physician, I woke up completely frefreshed and energized. That afternoon my doctor called. I had to go to the ER to be examined for a possible pulmonary embolism (blood clot) in my lungs. Even though my energy had returned and I didn't have any shortness of breath the ER visit was necessary.  The  ER ct scan showed no pulmonary embolism.

Several days later I learned of Marilyn's passing. She died on January 25, 2018, the same day my energy and strength was renewed.

After my lung cancer diagnosis in 2015, I added a ritual to my morning routine. Each day I start with a morning stretch. I take in three deep breaths while I say three things,

Then after, I take in three more breaths and say,

The body is the easy part. It's just little ol' me, standing over here, doing my thing.  The Angels and the Universe are a little harder for me to fathom. The Universe is too vast and complicated for me to try to visualize or comprehend. What is an angel? Who are my angels that i speak to every day?  Sometimes I picture my angels as family members and loved ones that have passed away. 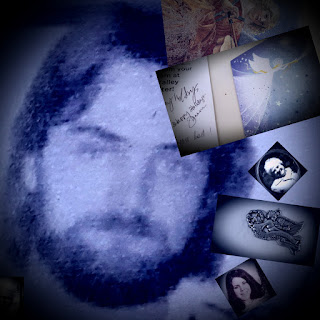 Sometimes I visualize an angel from a set of Christmas cards that I purchased many years back. Now, sometimes, Marilyn Pinaud comes to mind.

R.I.P. Marilyn Pinaud. May you be painting your greatest masterpiece on the largest canvas you've ever seen.  The next time I see one of those unforgettable Colorado sunsets  or multicolored morning skies,  I'll wonder if  your brush was behind it.