A Year in Review: Measuring Life in Events Not Dates

I've never been the type of person to remember exact dates of bad or traumatic events.  I know my father passed away in January when I was a child.  But i can't tell you the exact date.  It's the same thing with other family members and friends through the years. Sometimes i can remember what season it was with no memory of a particular month or day.  So, every year when winter rolls around,  i don't focus on the calendar.  January doesn't bring up old memories or sadness.  Sometimes,  i don't think of it at all.

That all changed after Lung Cancer and Moyamoya.  There are some dates I will now never forget and always will remember and celebrate.

I will never forget the date, August 14, 2015.  I have remembered it and acknowledged this date every year since.

I can't tell you what day of the week it was.  I do know and remember well that it was a work day for Jeremy and me. We were at the tail end of the multitude of tests that i had undergone over the previous weeks.  August 14, 2015 was the results appointment for the final test, a PET Scan.

Up to this point, we only knew about one lung tumor in my upper right lung lobe.  This was the appointment we would find out how active the cancer was.  Being naive and having no first hand experience with cancer, I thought that meant if that tumor was a weak or strong tumor.  That sounds so funny to me now.  It goes to show how much we just didn't know at that point.  We had been focusing on the fact that I was a good candidate for surgery to remove the tumor.  We both thought this was the appointment we would be given a surgery date, recovery time and the info for any follow up chemotherapy or radiation treatments.   Jeremy and I went to work that day.  We broke away for a lunch meeting with my Memorial Hospital oncologist.  We were going to return to work after the appointment.

This was the appointment we learned I was being diagnosed with STAGE 4  non small cell lung cancer.   My cancer had spread (metastasized) throughout both of my lungs and to my spine.  We heard the words, INOPERABLE, INCURABLE,  and TERMINAL.  We didn't return to work that day.

Why would I want to remember,  acknowledge and celebrate such a day?  I know some people that never talk of their diagnosis.  Some only refer to it as, "The C word".  To me it's almost like a birthday.  I don't remember being born,  but I still celebrate adding another candle to the cake every year.  I hate Lung Cancer and I wish I could forget it.  But you're going to find me every year celebrating my CANCERversary and the fact that I'm still surviving this inoperable, incurable, terminal disease.

Since my last CANCERversary I've had a few notable events take place.  It's been one helluva year!
They say the truth is stranger than fiction.  I wish I was making this stuff up.  Sometimes I can't believe everything that has happened to me over the last three years.  Then i see this recap of just my last year and realize it's incredible I'm here and able to blog and share my experiences.

I think it's fair to say the Lung Cancer Alliance National Advocacy Summit made the biggest positive impact this last year.  Lung Cancer advocacy has been important to me since my 2015 diagnosis.  I've known and shared the awareness facts and grim statistics of how Lung Cancer is the number one cancer killer but receives the least amount of government funding.  Lung Cancer Alliance gave me the opportunity to change this, for myself and everyone else diagnosed with Lung Cancer in the United States, which could in turn effect Lung Cancer patients around the world.  Capitol Hill changed me and I changed Capitol Hill.  As a result of my July trip to Washington, D.C., Senator Michael Bennet of Colorado is now a co-sponsor of the Women and Lung Cancer Research and Preventive Services Act of 2018 (H.R.4897 or S.2358).  I keep referring to this as, "My bill".  I mean, in a way it IS my bill.  It effects my future treatments.  It could potentially aid in the discovery of the next EGFR drug to keep me alive.  It could end or lessen the stigma associated with Lung Cancer.  This squeaky wheel will not stop until Senator Gardner and Representative Lamborn are on board too.  Keep checking your inboxes, gentlemen. 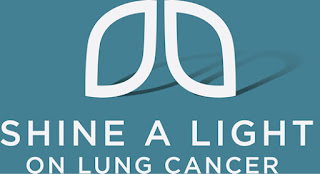 This year my CANCERversary party is gong to be my first Shine a Light on Lung Cancer fundraising event.  It will be a combination of an online fundraising campaign and an August 18 party in Colorado Springs. CO, USA.  Donations will benefit the Lung Cancer Alliance. Please join me in this celebration by making a donation, whether in person or online.  No amount is too small.