I have now experienced the most grown up and responsible event in my adult life.  This week I had the opportunity to go to Washington, D.C. with Lung Cancer Alliance for National Lung Cancer Advocacy Day. 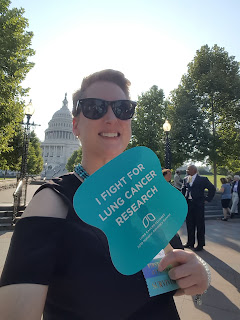 Being a hippie at heart and a registered Independent, making a plunge into politics never piqued my interest.  But when your life is on the line, you put on a big girl business dress, storm Capitol Hill with over 100 other lung cancer advocates and attend six scheduled meetings with congressmen and senators to demand a change in policy. 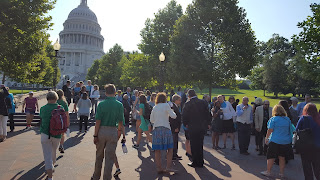 On July 11, 2018,  I met with representatives from the offices of four Colorado congressmen and both Colorado senators.

Gabriele Wright from Lung Cancer Alliance, three staff members from the International Association for the Study of Lung Cancer (IASLC, located in Aurora, CO) and myself operated like a well oiled machine as we opened the eyes, dropped jaws and educated everyone we met in D.C. 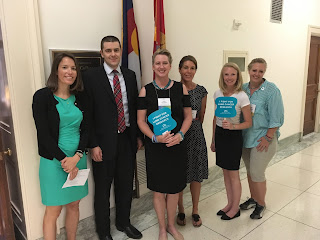 I was changing the face of lung cancer as we put a face to the bill.

I shared my lung cancer story of how life was for Jeremy and me the summer I was diagnosed with stage iv non small cell lung cancer caused by the EGFR mutation. We had made it past the point of a relationship when you know you are with your forever person.  We were talking about getting married. I was three years into my career,  the best job in the world, as a City Letter Carrier. I was on walking routes by choice.  I discovered the love of running.  I had joined the Jack Quinn's Running Club in downtown Colorado Springs.  On Tuesdays I would run a 5k with JQRC after a full day of work.  Then BAM!!!!, Terminal, stage iv lung cancer enters the picture.

I explained my treatment has been radiation and targeted therapies in the form of a (chemo) pill, that I take once a day.  I told them the amount of hope that I had when six lung cancer drugs were fda approved the year I was diagnosed,  (2015). Five of those drugs were after my August diagnosis. I've been on three drugs over the last three years.  Two of them were FDA approved in 2015. One,  Tagrisso, is the treatment I'm on now.

We explained lung cancer is not just a smokers disease.70% Of lung cancer patients now are never smokers or quit decades ago. More and more new lung cancer cases are young,  athletic,  healthy women, like me, and doctors don't know why.  433 Americans are dying every day from lung cancer.  Lung cancer kills more than breast, colorectal and prostate cancers combined.  But at the same time Lung cancer is grossly underfunded compared to other cancers. 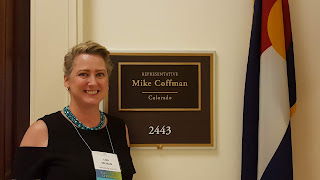 I've already sent my thank you letters to the representative's staffers that took the time out of their schedule to speak with me and requested a meeting at Senator Bennet's Colorado Springs office since he was not available to meet with me in person in Washington. I happen to know exactly where that office is located because that stop was on my mail route for four years.

Everyone in the U.S. can help support my efforts to change the future of lung cancer research.  You can call or write a letter/email to your representative. Tell them my story and/or your  personal connection to lung cancer.  Let them know the importance of the Women and Lung Cancer Research and Preventive Services Act, especially now as I am running out of FDA approved treatment options. At this point,  when the cancer outsmarts my current treatment,  There is no other FDA approved targeted therapy.

If politics has never piqued your interest and you don't know who your representatives are,  Click HERE#. Enter your zip code and click on the representative to see their contact information.